Palm Sunday of the Passion of the Lord 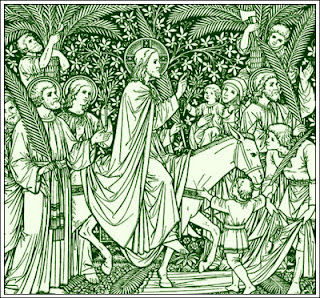 Passion.  The word evokes reckless adventure, impulsive romance, gestures too big to fulfill, and  the brief but intense relationship of Romeo and Juliet.  This word places Jesus in the tradition of the foolish romantics—an itinerant preacher from the margins schooled by his radical cousin (John the Baptist) and led to make one final, dramatic gesture to get his message out: die as a martyr.  But Jesus’ death was unlike the death of many of the martyred faithful to come.  His death wasn’t for a cause, but a relationship.  You see, God fell hopelessly in love with humanity and inserted Himself to be with his own creation to deliver this message of healing, love and forgiveness.  God’s power isn’t the power of Zeus with lightening-bolts from the heavens, but God’s message is now simply “Return; I love you”.


Throughout Holy Scripture, God has struggled and failed many times, just as His people have.  It has been an on-and-off-again cosmic love story between the Creator and His creation since humanity was first created and was given a choice not to love God.  This dance between Creator and created culminated in His great and final act of love: self-sacrifice on the cross.


Today’s gospel reading recounts this journey to the cross with Jesus as God leading the way, experiencing the pain and abandonment of His creation, the physical pain of a gruesome, ignominious death, giving into the abyss of his own uncreated end---all for love.  But in this remarkable journey, he found a few responding with courage: Simon of Cyrene shared some in your suffering, the women who gathered at the food of the cross and stayed there long after the men had scattered for fear of being arrested, the felon who believed because he, of all people, responded to the suffering of an innocent man, and finally the Roman centurion who saw in this suffering man God’s love.  This is pretty intense stuff and many would feel much better with “April Fools!”.  Rather than struggling to believe, many struggle to disbelieve because God’s affirmation of his creation, of saying “yes” to the cross, is the ultimate folly for a world seeking safety over communion.  God as Jesus, crucified, dead and buried.  Stay tuned.
Posted by Fr. Todd Scull, O.S.B. at 6:26 PM No comments: 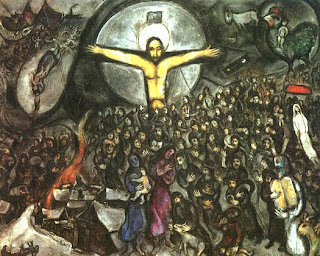 The Way of the Heart
Jeremiah is a prophet for the God's people in exile.  They broke the covenant of the Law established in the exodus from Egypt.  In short, they had lost that intimacy of God taking them "by the hand to lead them forth from Egypt".  As famous as Jeremiah is for his prophetic message of doom, it is today's reading from the prophet which reveals God's desire for a new covenant, one that will no longer be subject to the difficulties of written text as the sole foundation of relationship with His people.  Now God announces to Jeremiah "I will place my law within them and write it upon their hearts . . . . No longer will they have need to each their friends and relatives how to know the Lord."  God's placement of this law "within" prefigures the presence of the Holy Spirit which is the dynamic, existential element of our faith that makes us a people first and foremost on a journey of the heart rather than the head.  As arduous and demanding as the exiles of Egypt and Babylon were, and the subsequent exodus back into the Promised Land, the Christ Event reveals through the journey to the cross as the greatest exodus of them all.


William Sloan Coffin, pastor for years at the Riverside Church in New York, expressed this notion so well when he wrote "The longest, most arduous trip in the world is often the journey from the head to the heart.  Until that round trip is completed, we remain at war with ourselves.  And, of course, those at war with themselves are apt to make casualties of others, including friends and loved ones".


The authority of the priests, Temple and God's precepts written in stone was not enough to sustain relationship with God.  The revelation of Jeremiah's proclamation of a new overture of intimacy did not do away with priests, Temple and the written Law; but what was added was a sense of God that transcended text, Temple and priests.

Christ's presence as the non-Levitical high priest becomes that complement to the Law and Prophets.  For Christ proclaimed he did not come to abolish the Law and Prophets, but to fulfill them (Matt. 5:17).  The high priestly function of the Christ, in the letter to the Hebrews, is to suggest that Christ's sacrifice was himself in an act of pure love.  This sense of God's atonement, developed so well by Abelard in the 11th Century, expresses Christ's mission to win hearts by an example of reconciling love.  This pivotal shift from a primarily substitutionary atonement (God sacrificed Christ to atone for humanity's sins) to exemplary ("Come and follow me") moves us from simply another Temple sacrifice, albeit grand in scale, to a personal journey that involves sacrifice for all true followers of Jesus as the Christ.


The followers of Christ before the term "Christian" was coined, was people of "the way".  Early on, there was a sense that being a disciple was more than a function of intellectual assent, that being a follower of Christ involved a process, the give-and-take of a relationship with oneself, God, and a community of like-minded pilgrims.  Fulfillment of the Law now is fulfilled in its entirely in our relationship with God made possible by Christ's outpouring of God's love on the cross.  Stony hearts can read and follow directions, but hearts of flesh and blood seek communion.  Our Lenten journey is especially focused on the cross because it reveals so well the humanity of God in Christ, the spectacular overture of our God to win our hearts.
Posted by Fr. Todd Scull, O.S.B. at 5:08 PM No comments: 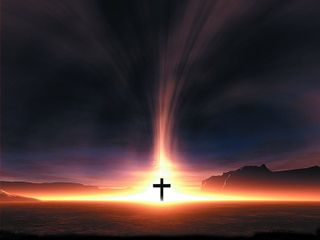 The holding up of the serpent in the desert referred to in today’s gospel is the story from Exodus when God’s people were grumbling and forgot God’s mercy in their deliverance, so God sent poisonous snakes to get their attention.  The people repented and God had Moses fashion a bronze serpent and put it on a poll, and everyone who gazed upon the serpent were healed.  Jesus uses this allusion to Exodus to suggest that he will be “raised up”, both in the sense of being elevated on the cross, and resurrected after the crucifixion.  This sense of salvation being linked to setting eyes on the cross is suggests the power of conversion is linked to witnessing the crucifixion and resurrection.


It is interesting to note that King David, a few centuries later, had Moses’ bronze serpent destroyed because people turned it into an idol; they could not get around mistaking the object for what lay behind the object.  Indeed at the heart of our looking at the cross, it isn’t any particular cross of Christ crucified we look at but what it represents, the one, holy cross of Christ; a man and God who bore our sins; we can only see the salvation of the cross if we can see beyond the image of Christ and see the sins borne by God as Jesus on the cross.  These sins become visible only to the one who has repented, has turned so he or she can face the cross and live.  An unrepentant sinner only sees sheer foolishness; any sound-thinking god would have simply started over this ill-conceived experiment and leave out free will this time.


Last week in Paul’s letter to the Corinthians the apostle declares “For the message of the cross is foolishness to those who are perishing, but to us who are being saved it is the power of God”(1Cor.1:18).  Likewise, Jesus in today’s gospel says “...whoever does not believe has already been condemned”.  This condemnation does not come from God, but from the ineffectiveness of what they worship that ultimately fails to offer salvation. The cross of Christ can’t save one who can’t see their sins in the wounds of Christ, cannot see how their sins participate in wounding a wider world and, ultimately God. Sin is never private, it is always communal because we live in a tissue of social relationships and are interconnected in this kind of cause-and –effect dance more now than ever before in the world’s history.  You might not be able to grasp how your sins wound God, but you can, if you care to look, see how sin wounds the one whom you have offended, and that person is, for you, Christ. That is why the Cross is such a powerful devotion for the faithful; it calls us to contemplate the wider effects of our sin, sin that can pierce the very heart of God.  In our repentance, God heals those wounds and Christ’s Cross becomes the Crown of Easter.
Posted by Fr. Todd Scull, O.S.B. at 2:43 PM No comments: 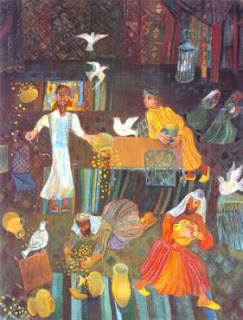 Spring Cleaning: Come as You Are

Today’s gospel is typically referred to as the cleansing of the Temple, rather than something more graphic like “Jesus Loses it”; but, as the text suggests, this is what seems to happen.  The “Lamb of God” is overturning tables and using an improvised whip to drive the money changers from the Temple.


Considering the emphasis on receiving the Law in Exodus, today's reading is a theological complement; Jesus himself fulfills the law and is the new temple of worship.  Worshiping God no longer is a function of ritual observances, but the sustaining work of a more intimate relationship though the person of Christ.  That is why Jesus’ discussion of rebuilding of the Temple refers to himself as the new Temple: the place where one goes to encounter God.  There is no need to “change” what you have to the money of the Temple to then buy an offering.  Christ is both the temple and sacrifice.


In Mark and Luke, the gospels reveal the corruption of the entire system of money-changing and offering inferior sacrifices to those who could not offer a proper sacrifice.  Jesus’ anger sprang from seeing the separation of the classes and the burden imposed upon the poor to gain access to worshiping God; it was, quite literally, an economy of mediation.


As a Church that carries on the mission of Jesus the Christ, it is important for us to occasionally “clean house” of the practices that keep people from approaching God in worship.  Lent is a journey of cleansing of our temple, of driving out those elements which seek to undermine the egalitarian nature of God.  For example, perhaps our pride, or our selfishness can keep God’s grace at arm’s distance for some we deem unworthy.  Today’s gospel asks us to consider what elements in our temple need removing because it hinders God’s grace from being distributed to all who come.  Is the grace we distribute the quid pro quo of the Temple of Jesus’ time, or is it simply the quid pro nihil “This for nothing” that Christ offered us and we are to offer the world?
Posted by Fr. Todd Scull, O.S.B. at 6:47 AM No comments: