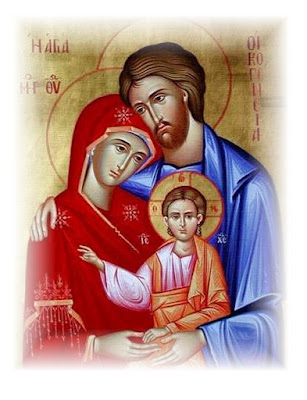 What makes a family holy?
In today's readings, we have two "holy" families: Hannah's son, Samuel, is a blessing that ends her infertility, whom she returns to God by dedicating him to the priesthood.  Our second holy family is the holy family of Mary and Joseph.  What can these families possibly teach us about the nature of what makes a family holy?

Hannah's dedication of Samuel to God seems odd and completely counter-intuitive. Just when her prayers had been answered, and she had given birth, she gives the child to Eli, the local priest, to raise him dedicated to the priesthood. Hannah's prayer was answered not in her having a life with Samuel, but in simply being able to bear Samuel. Her gratitude to God was in letting go of her most precious gift to become a gift to her people.  Samuel goes on to become chosen of God to be both a priest and prophet of his people.

A woman's sterility in those times was a serious problem that many regarded as a sign of God's disfavor.  Even today, among couples trying to conceive a child, being childless is disheartening. Mary and Joseph's experience of Jesus, who "increased in wisdom and stature and favor with God and men” might seem ideal, but consider the growing awareness of the burden of letting such a child face the eventual scorn, rejection, and crucifixion as Messiah.  Mary "keeping all these things in her heart", patiently enduring the death of John, and likely foreseeing the road to the crucifixion her son was traveling must have been a test of faith few would readily embrace.

Even without the heroic sacrifice of Hannah and Mary, facing the initial distancing of adolescence, and later the "empty nest", couples can find family life too stressful to be considered “holy”.
The quality of holiness is built around a life dedicated to serving God through the family.  A holy family, then, is a family whose dedication moves beyond the typical familial ties to a sense of serving as a family the God whom they worship.  In such a family, children are regarded as a gift whose ultimate purpose is not service to the family itself, but to God.  Likewise, a couple's love, when animated by holiness, is ordered not only to mutual fulfillment but is itself a gift from God that reaches beyond family, tribe or national boundaries.

When, like the holy family, Christ is at the center of the family made holy by God's gift of the couple's love, the love of God becomes embodied in the life of the children.  Family constitutes a great sacred potential for revealing God's love to humanity.
Posted by Fr. Todd Scull, O.S.B. at 6:20 AM No comments: 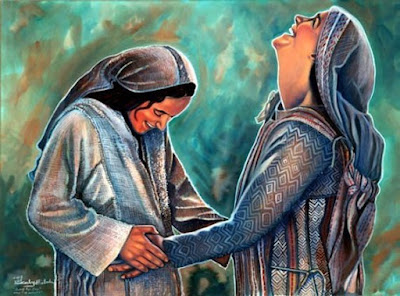 “Blessed are you who believed that what was spoken to you by the Lord would be fulfilled.”


Mary believed the words of the angel.  She didn’t demand proof, sign a contract to cover all reasonable contingencies in case the whole mother-of-the-Messiah thing didn’t work out.  Her response to the word: “May it be it done to me according to your word.” In our faith, we have Jesus as the Word--the embodiment of God as human—Emmanuel, “God with us”.


We also have the word of holy scripture that is our link to the living tradition of our brothers and sisters in faith, used by the Church as a tool of furthering the inspiration of the original community of believers. Unlike Mary’s time, we are overwhelmed with words.  It is estimated that nearly 300 million books will have been published this year alone!  That doesn’t include the words of advertising spoken on television, splashed across computer screens, covering bus shelters, billboards, and car bumpers.  It is hard to set your eyes on an object that doesn’t ask you to read something.  We are awash in more words than at any other time in history, yet we seem to have less and less to say.


Cutting through this clutter is one righteous quest to enter the Christmas season that begins Tuesday (Christmas, for us, begins on Tuesday). In today’s gospel, John the Baptist as an infant still inside Elizabeth, responds to Elizabeth’s hearing of Mary’s greeting.  This chain of events reveals something important about how we exist in relationship to God and to one another.

Since baptism, each of us has been comforted, protected, educated by and imbued with the presence of the Holy Spirit residing within us.  Like Mary and Elizabeth, pregnant with promise and God’s Spirit, our bond with God and one another is powerful. Our spiritual journey of Advent, distinct from Lent, is essentially communal—we prepare as a community, much the way both Elizabeth and Mary were in a strong bond of having received and believed God’s promise.  Each gave birth to the fulfillment of that promise, but also had to be sustained by it because of the difficulty to remain faithful during the rough times ahead for each woman.

We receive the Word if we are open to its life within us as a community who listens, who is attentive to God's promises.  Holy scripture can only become Word through the ministry of the Holy Spirit and our willingness to, like Mary, have it transform our lives.  With Mary, our faith-filled response is "May it be done to me according to your Word".
Posted by Fr. Todd Scull, O.S.B. at 6:24 AM No comments: 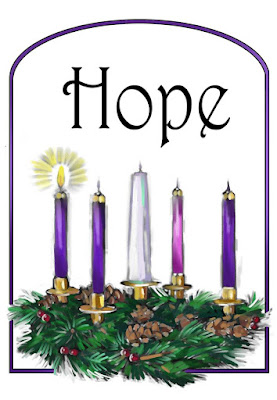 Today begins Advent, a time of preparation to receive Christ at Christmas, but it is more than referencing the past, it also connects with our sure hope of Christ’s return and the inauguration of God’s reign. Jesus proclaims in Matthew: "Therefore, stay awake!" What are we watching for? Are our heads turned heavenward searching the skies for Jesus returning in glory? Remember the angel's advice after Christ’s ascension?
And as they [his disciples] were gazing intently into the sky while He was going, behold, two men in white clothing stood beside them. They also said, "Men of Galilee, why do you stand looking into the sky? This Jesus, who has been taken up from you into heaven, will come in just the same way as you have watched Him go into heaven (Acts 1:11).
Our mission as watchers involves looking for the dwelling of Christ among us now by the power of the Holy Spirit. We need to be alert because it is often difficult to see Christ through the layers of sin that surround others that are unappealing. Perhaps we may have difficulty seeing Christ in others because we first must acknowledge Christ within ourselves as the lowly beggar, the control freak, or other undesirable.
Let that be our beginning, then. Let us look for Christ where he is least likely to be found, both in others and those places in our lives that need healing from sin. Let us not be afraid of venturing out into the dark, or inwardly into the dark places in ourselves.  Let Holy Scripture be a place to start, and let your prayer proclaim “Your word is a lamp for my feet, a light on my path” (Ps.110:105). On this path we will encounter Christ in the most unexpected ways as we journey in Advent for Christ’s appearance over two thousand years ago was equally hidden and unlikely. Who would expect God among us in a backwater town, among farm animals, shepherds, and pagans in the middle of the night?
Posted by Fr. Todd Scull, O.S.B. at 6:18 AM No comments: